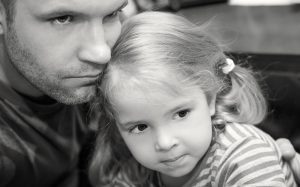 If a father is granted his change of custody request at trial then the Judge issued a new Order. The father must make sure those orders are followed. If a mother has lost custody then there is a likelihood that the Judge has ordered visitation, whether supervised or unsupervised. No matter what events have occurred, and what the father’s personal feelings are regarding the mother, if specific visitation hours have been ordered by a Judge then a father must make his best effort to ensure that the children are present. Not producing the children is a direct violation of the court and the father may be held in contempt. If there is a situation in which the children refuse to participate in visitation then the father should contact his attorney for advice. But it cannot be stressed enough that the father may not make an independent decision to miss a visitation session without permission. If the mother regularly misses scheduled visitation then the father should contact his attorney. He may also wish to file a Motion with the court and request that visitations be reduced or terminated.

If the Court has modified a custody order then it can be a difficult adjustment for everyone. Life may not smooth over overnight, but it is important to stick to the Court’s orders and not waiver. Not following court orders can put a father’s own custodial rights in jeopardy. If a father has a question about the court’s orders following a trial, it is important to consult with one’s attorney immediately.