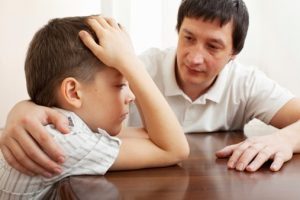 This is the next post in my series discussing the rights fathers should be aware of during a Las Vegas Family Court dispute. In my last post I discussed information fathers should know in regards to how child support is set and what to do if you believe you have been ordered to overpay. In this article I will be discussing how a father may win primary custody of his children in a child custody dispute.

Nevada is a state which automatically presumes that both a mother and father should have equal custody rights to their children. The presumption for a Las Vegas Family Court Judge is that the parents should be ordered to share custody of their children 50-50. If a father believes that he should have primary physical custody of his children then he has the same burden as the mother in regards to proving why such should be the case. A father who wishes to have primary custody must show that joint custody would not be in the best interests of the child.

There are many reasons why joint custody may not be in the best interests of the child. The first reason is if the mother is in some way unfit to raise the children. If the mother has a drinking problem, uses drugs, is mentally unstable, or does not have a suitable living situation, then the father would have a strong case to argue that the children would not be safe living with the mother on a part-time basis. The second reason might be if the relationship between the mother and father is extremely hostile and the parents have extreme difficulty co-parenting together. In this case the father must prove that he has made an effort to be civil and co-parent with the mother and that the mother refuses to cooperate. As the Court has little tolerance for parents who refuse to try and get along, the father must make a significant effort in this case to try and resolve the situation without Court intervention. But should that not be possible, the Court will take into account the efforts the father makes to get along with the other parent on behalf of the children.

Another instance in which primary custody is often awarded to one parent is when one parent plans to move outside of Nevada. Due to logistical reasons it is often not possible for parents to share 50-50 custody while living significantly far apart. In relocation cases, the father must prove that it is in the children’s best interest to reside in his custody. If the mother is the one planning to move outside of the state then it is her burden to prove that relocating the children would be in the child’s best interests. If the father wishes to stay in Nevada, has been an active parent, and has an equal ability and desire to be the custodial parent, then a Family Court Judge will often order the children to remain in the living situation they are familiar with. However, relocation cases can often turn contentious and both parents may make a reasonable argument for why they should have primary custody. If a former spouse plans to relocate and wishes to file for primary custody, it is important to consult with a family law attorney right away.