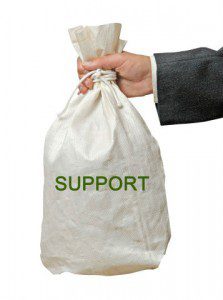 This is the next post in my series discussing fathers’ rights issues that frequently arise during Las Vegas child custody and visitation cases. My last post discussed the options and choices a man has when he unexpectedly learns that he is the biological father of a child. In this post I will be discussing information men often wish to know with regards to child support in Nevada.

Nevada child support is calculated based on a complicated economic formula

Many people mistakenly believe that having a “good lawyer” is the key to getting out of paying large amounts of child support. That is simply not the case; if you are the biological father of a child, you will be required to pay a certain amount of money every month for the care of that child. The amount in question does not have anything to do with the negotiations of your lawyer- it has to do with your education, your gross annual income, the percentage of time you spend with your child, and any special medical or educational needs your child may have. Nevada has a formula that is used to calculate child support; if a person wishes to request a deviation from that calculation, they must have a good reason for asking to do so.

One reason, is if a person believes the Court has set a child support order based on incorrect financial information. When a person owns their own business, is employed by the the military, or has multiple income streams, it is possible to disagree with the State’s assessment of their gross income. It is common for many men to ask for a child support adjustment if they feel the order has been set based on an inflated income number. A second reason a person might disagree with the child support order is if the mother and father disagree on “special circumstances.” For example, if a child has a serious disability that requires specialized education and transportation, the Court will not question whether or not the father should pay half. However, if the mother of a nondisabled child wishes for the father to pay half of private school tuition instead of sending the child to public school, the father may have a legitimate case as to whether the expense is “necessary.” If you believe that your child support order is higher than it should be, it is important to speak to an attorney regarding your concerns.

Many fathers do not have a problem with financially supporting their children. However, a common concern is that child support is going towards a mother’s maintenance and not the children’s welfare. If this is a concern, the first thing an attorney will do is to file discovery to investigate the mother’s finances. If it is found that the mother is using child support money on herself instead of the children, the mother can get into trouble and even lose custody of the kids. In other cases, a Judge may allow a father to pay for certain expenses directly, rather than sending the mother a large check. For example, the Court may allow a father to directly pay for private school tuition, uniforms, and school supplies, rather than sending the mother a check to cover the expenses. If a father believes that his child support is not going towards the welfare of his children, it is important to contact an attorney immediately to discuss all of the legal options.