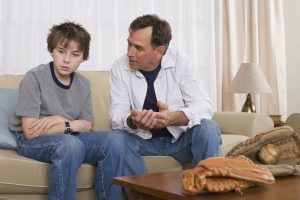 This is the next post in my series on the issue of “teenage discretion” in Las Vegas, Nevada child custody cases. My last article explained when the Court will consider who a child wishes to live with and the weight which will be given to those wishes. The Court will consider a child’s wishes relevant when they are of sufficient age and maturity to make such decisions. The Court, however, will not be concerned with a child’s wishes when they are based on immature or irrational reasoning. To better understand how the Court will view your particular situation, it is strongly suggested that you speak with an attorney. In this article I will discuss another important topic – the limits of teenage discretion after it has been granted by the Court. If you or a family member are in need of assistance then contact my office today to speak with a fathers’ rights lawyer.

The Court will sometimes grant a teenager discretion as to how they will spend their time if the parents agree on having such an arrangement and the Judge is confident that it can be executed in an efficient manner. When a child has been granted such discretion, he or she will essentially decide which parent they will live with on what days. This is different from a traditional child custody order, which has clearly delineated days and times. A child’s discretion, however, will have its limits. These limits include the fact that the child may not use such authority to essentially modify the Court’s custody order. The child may not, for example, choose to spend ninety percent of their time at one parent’s residence when the mother and father have been granted joint physical custody by the Court. In other words, the child will be given a great deal of flexibility in how they spend their time, but they must adhere to a general framework.

An illustration is valuable to understanding how the foregoing principles are applied in practice. Suppose the parents have joint physical custody and the Judge has given the child discretion as to how they will spend their time. Now suppose the child chooses to spend an overwhelming majority of their time with one parent due to proximity to other children in their social circle. Both parents, however, have been encouraging the child to maintain a fifty-fifty timeshare. Under this scenario, if the case goes back to Court, the Judge may restrict the child’s discretion or put a more strict schedule in place. Now suppose the foregoing facts, except for that the parent, who has received a majority timeshare, has been actively encouraging the child to spend more time at their residence and to ignore the other parent. Under these facts, the Court would likely put a stricter arrangement in place and, depending on the circumstances, may even award the non-offending parent primary custody. How the Court rules will depend on the facts of the situation and it is crucial that you speak with an attorney.

If you are a dad dealing with teenage visitation then contact my office today to speak with a Las Vegas fathers’ rights lawyer. I understand the type of frustration that can occur with such cases and my office will give your case the attention it deserves. We are ready to assist you.