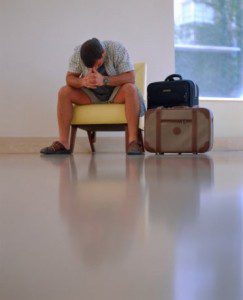 This is the next post in my series discussing mistakes Las Vegas fathers make during their Nevada divorce and how such mistakes can impact their child custody case. My last post discussed why fathers who travel for work may have a difficult time winning joint physical custody of their children. In this post, I will be discussing why it can be a mistake for a man to move out of the family home immediately following a separation from his wife.

It is understandable that all persons involved may feel like they need space and wish to remove themselves from the situation when a marriage has fallen apart. However, it can be difficult to put distance between oneself and their ex-partner without inadvertently alienating the children. If a father chooses to leave the family home due to strife in the relationship then it is important to maintain frequent and regular contact with the children, no matter how contentious the relationship with the mother may be.

It sends a message to the Court that the children are not a priority when Las Vegas fathers do not actively insist on spending time with the children following a separation. This is true even if the lack of time spent is in order to avoid arguing with the mother. Many dads make a mistake of taking a step back from parenting until the high emotions of the situation have waned. This frequently backfires as it provides the mother with an argument that the father is absentee and does not deserve full or joint custody. This will be detrimental to one’s chances for joint custody in any Clark County divorce case.

In order to avoid a problem it is best for a father to file for a custody order as soon as a separation occurs. This shows the Court that parenting is a top priority to the man. Having an order also provides a structured set of rules and guidelines for the couple to follow while they are navigating a personally difficult time. With a set custody and visitation schedule in place, a father has proof that he has continued to be an active parent in the wake of the relationship ending. It also prevents the children’s mother from preventing the father from seeing the children or playing malicious games. While many men do not initially want to file for a custody plan early, it is far easier to have a structured plan into place then assume that you can “work it out” with the mother, and then have the relationship further deteriorate down the road.

If you have recently separated from your partner, it is important to immediately have a documented plan in place that proves you are an active father. Contact our Las Vegas family law office today for a consultation and learn more about how to set yourself up for a successful custody fight.