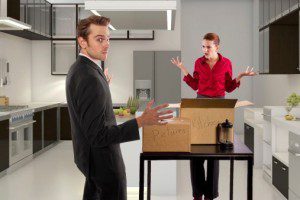 This is the next post in my series discussing what husbands in Las Vegas need to know about dating during divorce proceedings. My last post explained how introducing a new girlfriend to your children could potentially impact your child custody case. In this article I will explore if there are any negative consequences to moving a new girlfriend into a home prior to the finalization of the divorce.

The short answer is that the Clark County Family Court will not stop a man from falling in love and moving in with his new girlfriend. It is not illegal for a husband to move a girlfriend into the community home prior to a divorce. This is true even if that home still remains community property. However, if the divorce is contested then there are very real consequences that may occur, particularly if finances are a sticking point.

If a husband moves his new girlfriend into a home that is community’s property then it is the community that is providing the new girlfriend a place to live, not just the husband. As both husband and wife would continue to own the property until a final settlement has been reached, this creates a situation in which the ex-wife could potentially demand rent or further compensation. Even if a husband moves into a living situation that is not part of the community, such as a new apartment, issues may arise. If issues such as spousal support are currently being contested, a husband would have difficulty arguing that he is not able to afford alimony if he is currently supporting a new girlfriend. A Court would see a husband spending money to support a new girlfriend as “marital waste” and would not consider these bills as necessary expenses. Opposing counsel would have a very good argument that an ex-wife’s spousal support is going towards a new woman, and a Court may very well order the man to pay higher alimony than he would have had to otherwise.

A husband often has a new found sense of freedom once a couple has separated. This may make him want to spend money in ways his wife did not approve of during the marriage. While this is understandable it is not generally a good idea until the divorce is finalized. Spending excessive amounts of money only provides the opposing side with proof that the man is wasting money that partially still belongs to the ex-wife. Until a divorce is complete, it is advisable to avoid giving expensive gifts to new girlfriends, not spending excessively on dinner dates, not paying a new girlfriend’s rent or other expenses, and not moving them into your home. While a husband is legally able to do whatever he wants and may spend his paychecks in the manner he sees fit, it is important to acknowledge the potential financial consequences. If one has fallen in love and wishes to move on with his new relationship, it may be advisable to consider settling with the ex-spouse in order to move the proceedings along.

If you are currently dating and are worried about how it will affect your divorce it is important to speak honestly to your attorney about your financial and personal goals. Call our Las Vegas family law office today to schedule a consultation.