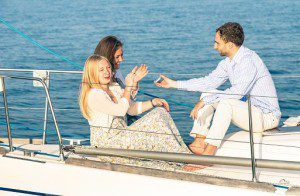 This is the next post in my series discussing what Las Vegas fathers need to know about dating during divorce proceedings. My last post provided an overview of topics that I will be exploring in depth over the course of the series. In this article I will be talking about whether introducing a new girlfriend to your children could potentially harm your child custody case.

The short answer is no. The Clark County Family Court will not punish a father for moving on with his life and dating a new woman prior to the finalization of his divorce. With that said, it is a good idea for a father to keep the needs and feelings of his children in mind. It is understandable that introducing a new woman into a child’s life following the dissolution of a marriage will be difficult. However, there are responsible steps a father can take to reassure the Court that he is mindful of how his dating life will affect his children.

A good rule of thumb is to avoid introducing a new girlfriend to children until the relationship is serious. Children can get attached to new partners and children may feel abandoned if their father begins a relationship with a new girlfriend and the relationship later does not last. A second rule to live by is to gradually introduce a new girlfriend. Plan a family friendly activity that is in public and will last a few hours. Avoid being excessively affectionate with your new partner in front of your children in the beginning and encourage your girlfriend to show interest in your children. Do not move your girlfriend into your home suddenly and avoid having adult sleepovers while your children are in the home until they have adjusted to your new relationship. By following these basic guidelines, Las Vegas fathers can prove to a Court that they have maintained clear and responsible judgement with regards to their children and their dating.

A Nevada Judge is not interested in policing a father’s social life under most circumstances. However, a father’s romantic relationship may become the business of a Court if a new girlfriend creates an environment that is dangerous or a safety concern for the children. For example, if a father begins to date a woman who brings drugs or firearms into the home where the children live or visit, then this would be a cause for concern. A Nevada Court would also take issue if a father began to leave his children home unsupervised during his visiting hours in order to go on dates or socialize. Finally, a Judge could modify child custody if a father entered into a new relationship that became abusive or violent. In any of these circumstances the mother would have legitimate grounds to request a change of custody.

If you are a Las Vegas father and have questions about how your new dating life may affect your child custody and divorce case then it is important to consult an attorney right away. Contact our office to schedule a consultation.